The Foundation in Action

The stories below are evidence of the positive impact that our investments in projects and organizations in improving the lives of those who are seeking justice.

(Deploy the titles to read the stories)

Helping Those Who Help Others - Elizabeth Fry Society

In this case, the “others” are not just anyone. They are the women involved in the justice system at the very heart of the Elizabeth Fry Society’s mandate.

What few of us consider are the unexpected challenges women and men face when they must maneuver through complex court and prison systems, face a parole hearing or even return to freedom.

Each stage can be a surprising challenge and, if left on their own, women may see their parole denied or a return to freedom followed immediately by a new offense and re-incarceration.

In this case, the “others” are not just anyone. They are the women involved in the justice system at the very heart of the Elizabeth Fry Society’s mandate.

What few of us consider are the unexpected challenges women and men face when they must maneuver through complex court and prison systems, face a parole hearing or even return to freedom.

Each stage can be a surprising challenge and, if left on their own, women may see their parole denied or a return to freedom followed immediately by a new offense and re-incarceration.

The Elizabeth Fry Society (EFS) understands this dilemma better than anyone else. EFS fills a gap in the justice system. Individual women going through the justice system are often ill-equipped to find their way through it, to benefit from all the options available to them, or to successfully navigate their way back into society. EFS works directly with incarcerated women and women in court, providing essential services such as legal education and advice, parole preparation, record suspension, supportive court workers and helps put Gladue factors before the court.

Let’s look at Marylee and April (fictitious names to protect their privacy), two women whom EFS helped with their respective struggles.

Marylee was charged with first-degree murder in the spring of 2019 and was remanded to Pine Grove Correctional Center. She first met an Elizabeth Fry court worker in May of 2019. The EFS women’s court worker program provides prisoners with legal information, referrals, and support. The court workers also appear on the inmate’s behalf and attend court on a regular basis for outreach work.

Marylee was frantic because she’d never been in prison before. Furthermore, her two young children were immediately apprehended by the Ministry of Social Services since she was their sole caregiver, and were sent to a foster home in Regina. Marylee didn’t see them until several months after she got out in June.

To make things worse, she was suddenly not allowed to speak to or be around her sister who is also her best friend due to a no-contact order because her sister was a witness in her legal matter.

With this much isolation, the EFS court worker was a most valuable support. “You guys were there for me when I was overwhelmed in Pine Grove and once I got out. For you to come and support me meant so much. You helped me do things like get to my appointments with my probation officer, my child and family service workers and the doctor, but you also helped me emotionally,” says Marylee.

April faces a different challenge. She is working with the Elizabeth Fry Society to get her record suspended. This will clear the way for job-hunting now that she has graduated from Indigenous Social Work.

“A record suspension means doors are opening for me that would not have been open without it. I will be able to work for agencies that wouldn’t accept me before because I have a criminal record.”

With a record suspension, April will have a chance at a better financial security for herself and her children. It can be the difference between living from paycheck to paycheck and really escaping the cycle of poverty.

Receiving help from the Elizabeth Fry Society via the Law Foundation of Saskatchewan to pay for her record suspension makes it possible to think about a new future. She says she couldn’t afford to pay for it herself as a single mother.

“If this goes through, I won’t have to live with the stigma of being a criminal anymore. I’ll be able to move on with my life without harsh judgment coming at me from agencies I apply for jobs with. I won’t have this hanging over my head when I go for a job interview knowing it could be a deal breaker that stops me from getting the job.”

The Law Foundation of Saskatchewan has played a key role in the ongoing operation of the Elizabeth Fry Society for the last eight years.

This partnership started when the Society was under the leadership of Sue Delanoy. Sandra Stack, its Executive Director since March 2019, expresses her appreciation in no uncertain terms:

“We are extremely grateful for the LFS’s ongoing support. There was even a time nine years ago when EFS had to take a hiatus. Without the Law Foundation, we wouldn’t have gotten up off the ground again. It was a key turning point when its support saved the society. And when you consider the work we do, it didn’t just put us back on our feet, it also let us help a lot of women get their life back.”

Stack is now aiming to expand the Society’s reach.  Operating mainly out of its Saskatoon office has been fine, but she is hoping to turn a part-time position in Prince Albert into full-time, and to also strengthen the Regina office. Again, in this expansion the Law Foundation will be a great support.  And when such a reputable endorsement is seen, Stack adds “it gives the Society a legitimacy other organizations are looking for before lending their support, it gives them confidence in who we are.” 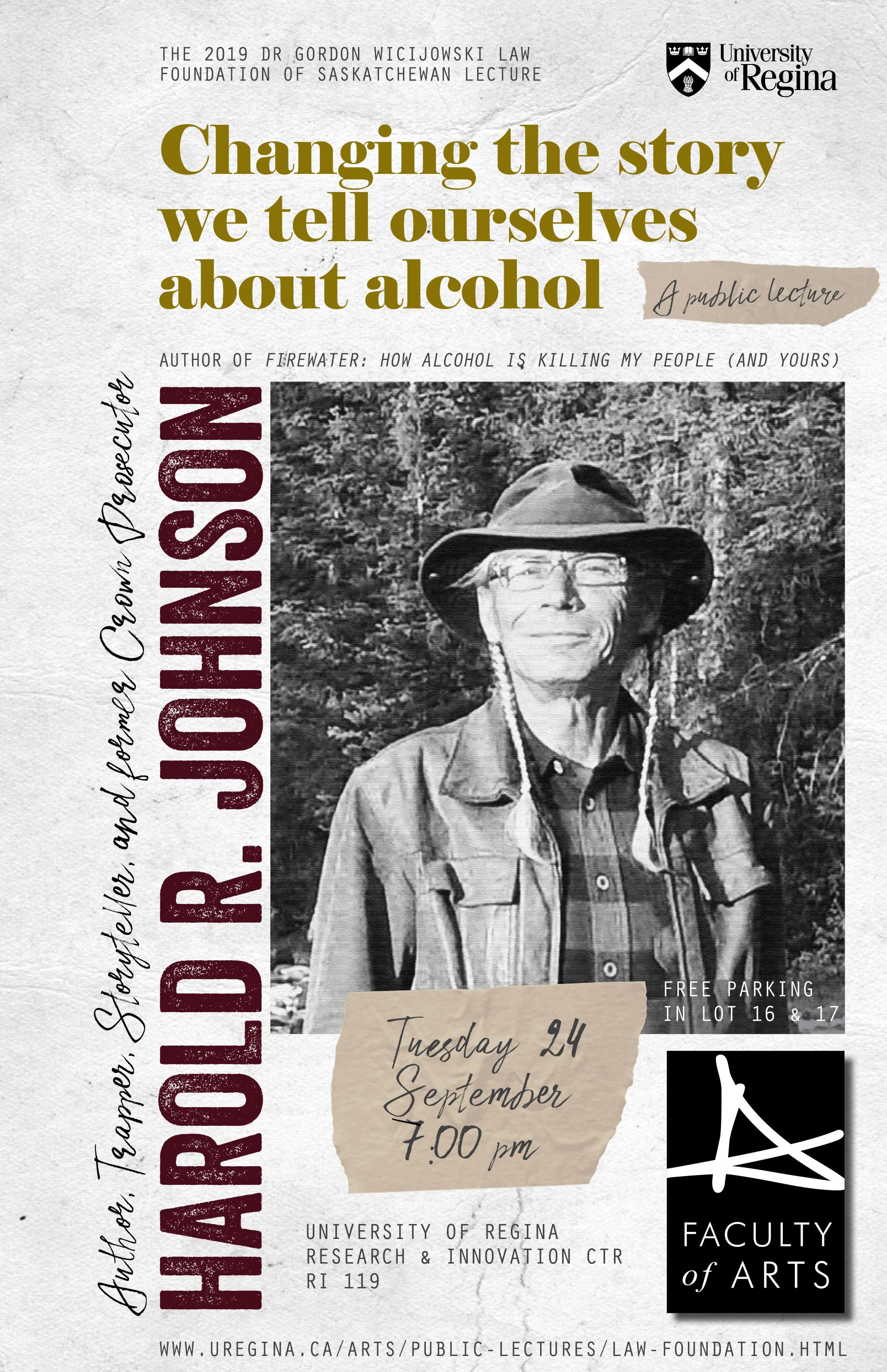 In 2011, in honour of his 37 years of service as the first Treasurer of the Foundation, a lecture series at the University of Regina was named after Dr. Gordon Wicijowski, FCPA, FCA. Ever since then, great speakers shared their insights on a variety of law-related subjects.

On September 24th, 2019, Harold Johnson spoke to an enthusiastic audience at the U of R Research and Innovation Center. A Montreal Lake Cree Nation Band member, accomplished author, trapper, and former Crown Prosecutor with the Ministry of Justice, Johnson used his unique storytelling talent to share his intimate observations of the impact of alcohol on crime and incarceration among Aboriginal people.

In his lecture titled “Changing the Story We Tell Ourselves About Alcohol”, Johnson persuasively examined the regrettable ineffectiveness of four corrective models (enforcement, medical, victim and  trauma) used to address alcoholism. None of them fully solve the issue, they at best offer temporary relief, but fail to really solve things.

Having served as a prosecutor and consequently having sent many Aboriginal men to jail (the enforcement model), Johnson saw first-hand the effects of alcohol in their lives. Yet he attested, “Twenty years as a lawyer, defense counsel and as a prosecutor, dealing primarily with criminal law, and I never saw a criminal. I saw people who got drunk and did something stupid, up to and including committing an atrocity, I’ve only ever prosecuted one man who was sober when he committed murder. I have never prosecuted a single sex assault that did not involve alcohol.”

Persuaded that the presence and effects of alcohol can and need to be combated, Harold Johnson has initiated a courageous national conversation, challenging us all to “change the story we tell ourselves about alcohol.” He was formally seconded to the alcohol strategy project in 2016, and has since retired from Justice but remains on contract to support the Northern Alcohol Strategy.

That strategy, Johnson concluded, is the most promising he has seen. Why does it work he asked, “because we got everybody involved”. Everybody means the hospital doctors, the police officers and local government in La Ronge. Over the last 3 years, trends have started to go down. Emergency room visits are down 19% and police calls have also decreased. There is still much work to be done, but Johnson remains optimistic, saying “it’s starting to work!”

The Law Foundation of Saskatchewan is proud to support this lecture series, and of the awareness each lecture brings to important legal and societal issues facing us today.